The Princian Commonwealth is a "country of countries," similar to the United Kingdom. Each "country" is referred to as a province:

The Princian Commonwealth's government is a known as the Prince's Order, with the Prince holding the most power.

The monarch of Princia is Prince Joshua I, and has been since its creation.

The Prime Minister is appointed by the monarch and is currently Prime Minister Alexander of the United Democratic Party. The monarch can theoretically appoint whoever they want to the post of Prime Minister, but Prince Joshua always appoints the leader of the ruling party after each election.

Only Ministers, Head Ministers and Lord-Ministers can join parties. The parties that are present in government are as follows:

Acts of the Prince's Order

Formally the Imperial Senate of Princia and the Prince's Order of the Confederation of Greater Princia. Acts before Feb 2020 are not shown.

The People's Confederation of Greater Princia was a change proposed by the Princian Party of Socialists (the ruling party at the time) to change the political structure of the confederation. It would remove the positions of Minister and Head Minister, in exchange for a council with an all-powerful leader at its head - reducing the Prince to a ceremonial role, stripping him of all his current powers. Everything would be state-controlled: the farming, goods, imports, exports, etc. Princia would be turned into a communist dictatorship much like the former USSR. This proposition was outright rejected by the public, with over 90% voting against it.

Union of the Albion Grandceltic

The Union of the Albion Grandceltic was a change proposed by the Princian Party of Socialists (the ruling party at the time) to repeal the 2019 Confederative Act, effectively dissolving the Confederation of Greater Princia - and replacing it with a more democratic, up-to-date form of government. The only downside was that it was a form of government that made Princia more susceptible to corruption and the like. A referendum was planned to be held on the 7th December 2019, 7 days after its proposal - but for unknown reasons Prince Joshua cancelled the referendum and subsequently rejected the proposal altogether. A new referendum was later planned to be held on the same date by Prince Joshua for the repealment of the 2019 Confederative Act, but a new confederation like the Union of the Albion Grandceltic would not be established in the Confederation of Greater Princia's place if the repealment was to pass. The Princian government was also suspended until further notice due protests and political turmoil. The Princian Coup D'état soon followed.

Flag of the Princian Commonwealth

Coat of arms of the Princian Commonwealth 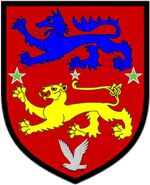 Seal of the Princian Commonwealth. Click here for blazon

Coat of arms of the Home Provinces of Addersonheath and Cathair

Coat of arms of Stonne

Coat of arms of the Soeds

Flag of Parvusmount
Add a photo to this gallery

The climate of the Princian Commonwealth is a maritime climate and is classed as Cfb in the Köppen climate classification.

For a completely up-to-date schematic table of geographical subdivisions and their area codes, click here

Retrieved from "https://micronations.wikia.org/wiki/Princian_Commonwealth?oldid=408895"
Community content is available under CC-BY-SA unless otherwise noted.